skip to main | skip to sidebar

I am a femivore, hear me roar!

Thanks to Bonnie over at going home to roost, I have stumbled across an article from the New York Times about the emergence of a new species of homo sapien - the FEMIVORE! Finally I know what to put down in the occupation section of the tax return! Well, the NY Times is actually reporting about the dilemma facing the femivore.......  "The wages of housewifery had not changed — an increased risk of depression, a niggling purposelessness, economic dependence on your husband — only now, bearing them was considered a “choice”: if you felt stuck, it was your own fault. What’s more that caretaking is undervalued in a society that measures success by a paycheck, their role is made possible by the size of their husband’s." But it seems the saviour of the femivore is the humble chicken coop. According to the NY Times, "Femivorism is grounded in the very principles of self-sufficiency, autonomy and personal fulfillment that drove women into the work force in the first place." But now, the femivores are concerned with  "feeding their families clean, flavorful food; reducing their carbon footprints; producing sustainably instead of consuming rampantly." This article really reached out to me and I felt it was almost written for me! 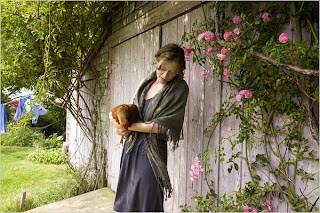 (this is not me....but its from here)
The femivore "may never do more than dabble in backyard farming — keeping a couple of chickens, some rabbits, maybe a beehive or two — but they’re still transforming the definition of homemaker to one that’s more about soil than dirt, fresh air than air freshener".
I love it! Go and have a look over at the NY Times Online.
The femivore.......does she sound like anyone you might know?
Posted by Mel - The Organic Mamas at 4:21 PM 1 comment:

A big warm mama hug to Manly Health Foods who are stocking our Big Mama and Little Mama organic cotton shopping bags / totes. The owner-manager of Manly Health Foods, Emeli, has worked in the Naturopathic field since 1998 and has an Advanced Diploma in Naturopathy and a Diploma of Nutrition - so she really knows her stuff - and she is really lovely to boot! Manly Health Foods has a huge range of products and the staff are always friendly and helpful. Go and say Hi from the Mamas!

I thought this week that I would slowly (to create a sense of intrigue!) start introducing to you our 3 lovely ladies - our gorgeous, prolific egg laying chickens. We have had them for about 7 months - and we love them. Besides supplying us with 3 gorgeous eggs every day - and the occasional double yoker (woo hoo) - they make the sweetest pets.
They are our own recycling system eating all of our food scraps and other bits we find at the back of the fridge. Since they came to live with us, and together with our 2 compost bins, our garbage bin is often half full (or maybe that should read half-empty). The reduction in our kitchen waste is really amazing. And whenever we are away on holidays, our chicken-loving neighbour is only happy to look after them - with the added bonus of fresh eggs.
We bought our 3 ladies off the most passionate chook man ever known to man - he's Dave Ingham from over at Rent-A-Chook. He is so knowledgeable and helpful - and incredibly funny to boot. He started his business out as a hobby but his enthusiasm has helped in to grow. He also showed us how to make some simple water and feed containers out of the humble old milk cartons.
So lets start this week off with the end product and work our way back................ 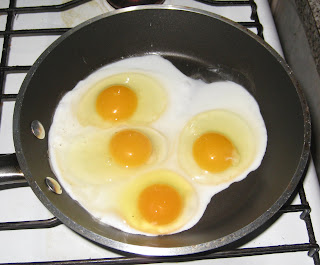 Its great to see another mention of our gorgeous Mod Green Pod fabrics on the superfab Design*Sponge blog. This time its Butterfly Jubliee in Raspberry/Honey together with a tutorial on how to make an ottoman cover. And here's the end result.......... 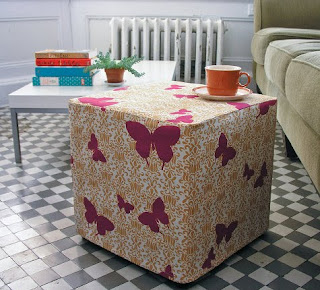 Photo from Design*Sponge
Posted by Mel - The Organic Mamas at 2:49 PM No comments:

Who is Mama Mel?

Mel - The Organic Mamas
Sydney, NSW, Australia
I'm a coal miner's daughter, a very happy mum and a loving but strong-willed wife (!) attempting to bring a little country life to the city. 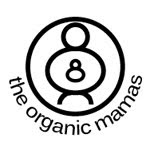 These wonderful stores are stocking The Organic Mamas products: